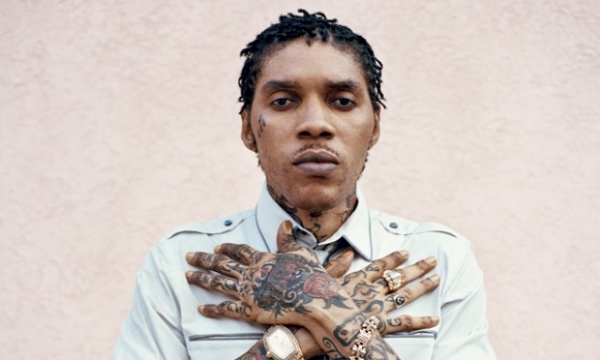 Adidja Azim Palmer (born 7 January 1976) better known as Vybz Kartel, is a Jamaican dancehall reggae artist, songwriter and businessman. Some of his singles include "Clarks", "Ramping Shop", "Poor People Land", "Tell You Say", "Summertime", "Dancehall Hero" "Like Christmas" and Major Lazer collab "Pon De Floor".
Kartel is now serving life imprisonment for the murder of Clive 'Lizard' William at his home in Havendale, a suburb north of Kingston, on 16 August 2011. He was sentenced on 3 April 2014 and will not be eligible for parole for 35 years.
Kartel started his career as a teenager in 1993 with his first recording "Love Fat Woman", released on Alvin Reid's label "One Heart", using the moniker "Adi Banton", an homage to Buju Banton. Palmer was later part of the three-member group "Vybez Kartel", keeping the slightly altered name after the group split up, and became a protege of Bounty Killer, for whom he claims to have written nearly 30 songs, including "Gal Clown".
Vybz Kartel rose to prominence in 2003 after a string of hits in Jamaica. The year culminated in a pre-planned on-stage clash with Ninjaman at the annual dancehall festival Sting in Kartel's hometown of Portmore. The clash turned violent when Kartel's crewmembers, as well as Kartel himself, threw punches and assaulted Ninjaman onstage. While Kartel's manager initially blamed Ninjaman for the fracas, Kartel himself quickly apologised to Ninjaman and Sting organizers for the fracas. Four days after the incident, the two artists appeared before the press to announce a settlement of their differences and to end any animosity.
He established his own label Adidjahiem/Notnice Records with his business partner and producer Ainsley "Notnice" Morris. In 2010, he released his album Pon Di Gaza 2.0 on Adidjahiem/Notnice Records in collaboration with Tads Record Inc. In Spring 2011, Vybz Kartel released an album on Mixpak Records entitled 'Kingston Story' with Brooklyn hip hop/electro producer Dre Skull.
Kartel has worked on collaborations and remixes with hip hop and R&B musicians Jay-Z, Rihanna, Missy Elliott, Busta Rhymes, M.I.A, Pharrell Williams, Kardinal Offishall, Akon, Jim Jones, Lil Wayne and Eminem.
In 2009 his song featuring female Jamaican deejay 'Spice', "Ramping Shop", debuted on the Billboard Top 100 Singles charts, and "Dollar Sign" being in regular rotation on urban radio stations in the US. His 2010 single "Clarks" was one of his biggest international successes, remaining in the top 3 Reggae Singles gaining the most radio plays in North America for 40 weeks. "Clarks" was also featured on the TV series So You Think You Can Dance Canada, and on a CNN segment on dancehall dance. MTV's Vice Guide to Dancehall featured Kartel at his weekly dance party, Street Vybz Thursday.
After splitting with Bounty Killer-led Alliance in 2006, Kartel founded the Portmore Empire, a group of dancehall DJ's and singers from his Portmore neighborhood that he signed to his newly founded Adidjahiem/Notnice Records. Members of the group as of 2011 were: Popcaan, Gaza Slim, Shawn Storm, Sheba, Gaza Indu, Tommy Lee, Singing Maxwell, Singa Blinga, Lenny Mattic. Former members include Lisa Hype, Gaza Kim, Blak Ryno, Jah Vinci, Dosa Medicine and Merital Family.

A public feud between Kartel and former collaborator Mavado arose towards the end of 2006, stemming from Vybzâ€™ much publicized departure from the dancehall conglomerate group The Alliance. The feud resulted in numerous diss tracks released, in which each artist dissed the other and their associates over popular dancehall rhythms. In a police-overseen press conference in March 2007, both Mavado and Vybz Kartel publicly announced an end to hostilities and apologized to fans.

However, by the summer of 2008, tensions flared with a renewal of â€œdiss tracksâ€ from each artist, and a lyrical clash between the two at Sting 2008 left mixed views as to the â€œwinnerâ€.

Most of 2009 saw a continuation of the public feud, which dominated Jamaican media and, to a certain extent, Jamaican culture, with the two artistsâ€™ factions, Gaza(Kartel) and Gully (Mavado), being adopted by Jamaican youth, in some cases leading to street violence.

On 8 December 2009, Kartel and Mavado met with Jamaican Prime Minister Bruce Golding in an attempt to end the feud, which had by that time fueled mob attacks in some of the inner city neighborhoods of Kingston. The two had performed together on-stage the previous night in a sign of goodwill at the West Kingston Jamboree, a concert promoted by drug lord[30] Christopher â€œDudusâ€ Coke.[23] After the truce in December 2009, the two artists were scheduled to perform a unity concert in March 2010 in Barbados, which was later cancelled by Bajan Prime Minister David Thompson.

In 2008, Kartel launched his own liquor line; Street Vybz Rum. He hosted a weekly dance party Street Vybz Thursday, at the Building, a Kingston nightclub he managed with Street Vybz Rum business partner, Corey Todd. The rum is officially distributed by Vybz Distillers Limited. The same year, he also released his own condom line, Daggering Condoms. Street Vybz Rum production was stopped in 2011 because of a disagreement between him and Corey Todd. However, the collaboration resumed in 2012 as the two settled their differences, and despite Kartelâ€™s ongoing incarceration.

Vybz Kartel has also hosted his own reality television show â€œTeachaâ€™s Petâ€ on CVM Jamaica broadcast channel, the first reality television show hosted by a dancehall artist in Jamaica. The premise of â€œTeachaâ€™s Petâ€ found 20 women living in a Kingston house vying for the artistâ€™s affection; the showâ€™s lascivious content elicited condemnation of its sponsor, telecommunications company LIME. The show came to a halt with the artistâ€™s arrest on murder charges in September 2011.

He is also part owner of the website Media Vybz, which he announce in 2010.

On 29 September 2011, Kartel was arrested by police for marijuana possession. Jamaicaâ€™s Major Investigation Taskforce (MIT) later charged him with the murder of a Jamaican businessman, Barrington Burton, conspiracy to murder and illegal possession of a firearm.

While in prison in 2012, his book The Voice Of The Jamaican Ghetto: Incarcerated but not Silenced, co-written with business associate Michael Dawson, was published.

Though Kartel was granted bail for the Burton murder on 23 March 2012 for JD$3,000,000, he remained in jail in connection with a second murder, of one Clive â€˜Lizzardâ€™ Williams, of Waterford, St Catherine. He was charged, along with two others including Vanessa â€œGaza Slimâ€ Saddler, with perverting the course of justice, after Saddler allegedly claimed that Williams had robbed her in order to mislead the police into believing that he was still alive. Kartelâ€™s trial was originally scheduled for 21 January 2013, but had to be postponed due to a lack of jurors, and was rescheduled for 11 July.

On 24 July a jury found Kartel not guilty of the charge of murder of Barrington Burton. However, Kartel remained in custody pending the second murder case. His trial for the murder of Clive Williams started on 18 November 2013 on 13 March 2014 he was found guilty by an eleven-member jury (10-1) of murder of 27-year-old Clive â€˜Lizardâ€™ Williams. The 65-day trial was said to have been the longest in Jamaicaâ€™s history.
Bookings & Keep In Touch With Artists